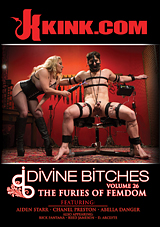 Account executive Jameson Reed didn’t know why CEO Chanel Preston was conducting their meeting in the basement of their office building, but he didn’t dare to ask. He didn’t question why Miss Preston had ripped off his pants, or why she had tied him up to the chair. After all, he owed her everything: she had groomed him from a mail-room clerk to his present position, and he was forever grateful to her. Then Miss Preston revealed the agenda of today’s meeting: three point two million dollars went missing under Jameson’s watch, and CEO Chanel Preston held him personally responsible. And since Jameson had no clue how the money had gone missing, Miss Preston was going make Reed repay it to her through private femdom sessions.

Reed did not dare to refuse Miss Preston’s demand, since his job and livelihood were on the line. Chanel smiled when she saw the panic in Reed’s eyes and started to collect on his debt, putting a ball-gag on him to reinforce her dominance. Miss Preston used her high-heeled shoes to crush Reed’s cock, enjoying the muffled noises that came through his ball-gagged mouth, and after covering his balls in clothespins she teased him, rubbing her ass over his dick and stroking it as the clothespins pinched his flesh.