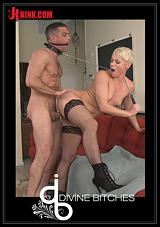 Maid Helena Locke had had enough of Lance Hart’s entitled attitude. He fit the classic “rich asshole” stereotype perfectly. In one hand, he threw money around quite carelessly, which helped to Helena’s pockets filled. On the other hand, the size of his ego was monstrous, and acted like the world revolved around him. His constant comments while she worked cleaning the pool finally drove her over the edge, and it was time Lance learned the price of being a world-class douche-bag.

Helena put Lance in bondage and covered his face with a mask. She woke him up by spitting cold water into his face, and giggled when he jumped like a fish out of water. After taking her time to decide how to proceed, Helena made sure Lance realized that the rules of his life had changed: she was in charge and Lance’s duty was to obey her every order unquestioningly. To drive this point home Helena busted Lance’s balls, squeezing and kicking them while he was helplessly bound.