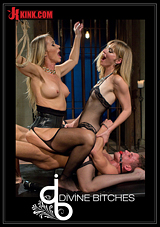 Breaking down Alexander has made Mona and Simone hungry for some fun, and they use him as their sex slave. Once the two dommes have satisfied their desires, Alexander is allowed the privilege of orgasm, with Mona stroking his cock until he shoots his load. Mona then feeds Alexander his own filth as a reminder of who now controls his life.