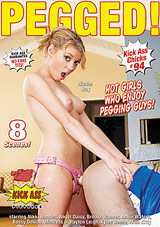 Once again, Nicole Ray heard boyfriend Billy DeWitt chuckling while she practised her cheerleading routines. Tryouts were happening tomorrow and she was very nervous, which is why she had invited him over for moral support. Instead he was laughing at her efforts and claiming that cheerleading was a joke. This did not go well with Nicole and she challenged Billy to join her in her practice to see how difficult it was. But to experience it fully, Nicole put make-up on Billy as well as one of her old outfits, with a wig making his feminization complete.

Nicole made Billy try and follow her routine and he failed miserably. He missed all his cues and could not hit the beats necessary to keep up with Nicole. Billy accepted he had been wrong and as reward Nicole let him taste her pussy. She told him that his cheerleading experience was almost complete, but there was one final step he needed to take and he had to close his eyes for it.