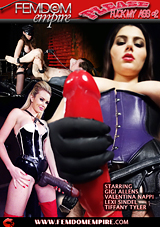 Mistress Allens wore a skin-tight latex outfit which showed off her glorious figure, and had locked Kade’s cock in a chastity cage so that any excitement would bring agony. A ball-gag muffled Kade’s mouth and his wrists were chained together behind his back. His arms were bound in strappado to the ceiling, and along with his nakedness made Kade’s vulnerability absolute. Gigi took her time with Kade, caressing his body once minute, flogging him the next until Kade’s mind and body were tight with confusion.