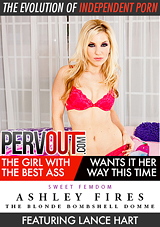 Ashley smiled when Lance’s sucking noises reached her ears. His jaw stretched wider when Ashley pushed her cock deeper down his throat, and pulled it out to slap it over Lance’s tongue. He discovered that Ashley was right, and a new kind of excitement blossomed within him. Ashley saw he was ready for her to take Lance’s experience to the next level. She threw him over the bed and pulled down the red panties he wore.