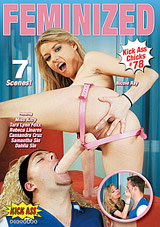 Keeping her house tidy and neat was important to Tara Lynn Foxx, but it seemed husband Jimmy Broadway lived to only make a mess of it. After she had spent hours making their bathroom spotless, Jimmy hand wandered in and destroyed it single-handedly. When Tara confronted her husband he simply shrugged it off, treating her like hired help that was expected to clean up his messes and shut up. This brought out Tara’s vengeful side and she prepared to teach Jimmy a lesson he would never forget.

Tara fetched their laptop and sat quietly while Jimmy laid on the couch eating snacks and letting crumbs fall all over the place. When he asked what Tara was doing she told him she was going to send everyone they knew the New Years Eve pictures where Jimmy was making out with a transsexual. He thought the incident was their secret, but Jimmy’s refusal to clean up after himself and disregard for his wife’s hard work had changed that. He begged Tara not to do it, and offered to do anything she asked in return. This was exactly what Tara had planned, and when she returned to the living-room she gave her husband a French maid outfit and ordered him to put it on.

At first Jimmy tried to talk himself out of it, but Tara would not hear it. He had to put on the dress, along with a wig and let Tara put make-up on him. She told Jimmy to clean up like a good maid should, and would berate him when he showed less than complete dedication to his work. But Jimmy’s punishment had only begun: Tara put on a strapon and made her husband suck it, reminding him that refusal would mean public shame. The feminized Jimmy had no choice but to accept Tara’s demands and swallowed her plastic cock.